“A'inaisa was a response to our Pasifika cultures being censored by a dominant cultural perspective. Our cultural arts practices often being censored and deemed inappropriate for the public”. - J M Gray

The following article recounts this work and was first published in the 'Esse' Journal.

your white box?” Sunameke and the adaptation of Pacifica Cultural Practice for the 8th Asian Pacific Triennial (APT8), Brisbane Australia.

In November 2015, Rarotonga born, Aotearoa (New Zealand) based contemporary artist, Numangatini Fraser Mackenzie (Numa) posted a series of photos on Facebook accompanied by the provocative caption: “Sunameke sisters activating...Show[ing] how their culture is [...] censored by institutions and deemed inappropriate for the public. Even though you’re invited you still need to fit in the white box #‎apt8‬ #‎sunameke.‬”

The photos were Numa’s documentation of a performative intervention called A’inaisa. (a Mekeo word that roughly translates as “I am responsible for that,”) by the Papua New Guinean/Australian performance group Sunameke, under the direction of Julia Mage’au Gray.2 Performed in November 2015, at the Queensland Art Gallery | Gallery of Modern Art (QAGOMA), A’inaisa centred around a young Papua woman, Moale James, who is supported by Julia and seven other women, all members of Sunameke. The black geometric tattoos that covered Moale’s body and face; long vibrant red, white, and black beaded necklaces which draped over her bare chest; long multi-colored grass skirt; headpiece; and decorative arm and ankle bands distinguished her from the sterile gallery environment. In contrast, Julia and the seven women are minimally adorned, wearing black tank tops and skirts, carrying woven shoulder bags, and two strings of beads, which they hold in each hand.

Prior to the performance, Julia selected a member of the audience to guard a role of yellow “caution” tape, the kind that is used to warn the public of a hazardous situation. The audience member––turned participant––was chosen for their physical characteristics as masculine presenting, visibly identifiable as ‘white,’ and attractive according to normative Australian standards of beauty.3 Singing a song of lament, Moale and the women moved from intimate to transitory spaces in the QAGOMA, until they arrived at the gallery’s spacious foyer. Visitors gathered to watch, perched from balconies and on the ground floor. Standing in the wide-open space of the QAGOMA foyer, Julia retrieved the caution tape from the spectator. The women continued to sing as she wrapped Moale in the tape. Walking wide circles around her, head down, Julia moved the tape from Moale’s feet, around her legs, across her torso, arms, and neck. When she reached her mouth, Julia became overwhelmed by the gesture she was performing. She dropped the tape and moved away from Moale. The women continued singing, and supporting Moale, until Julia’s children, Keama Aniheta and Salevasa Gray came. Wearing yellow t-shirts with “#caution” printed in black letters on the back, they unravelled Moale, took her by the hand and walked her away from the crowd. 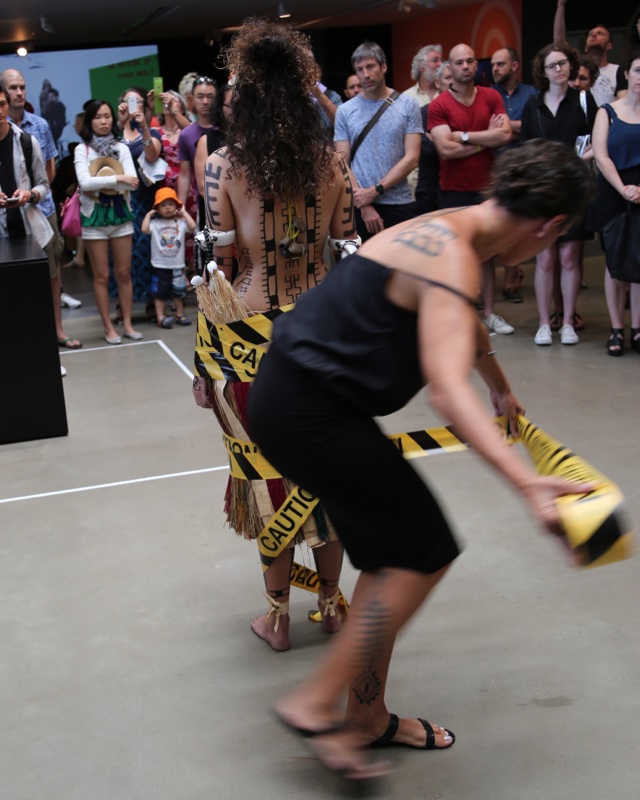 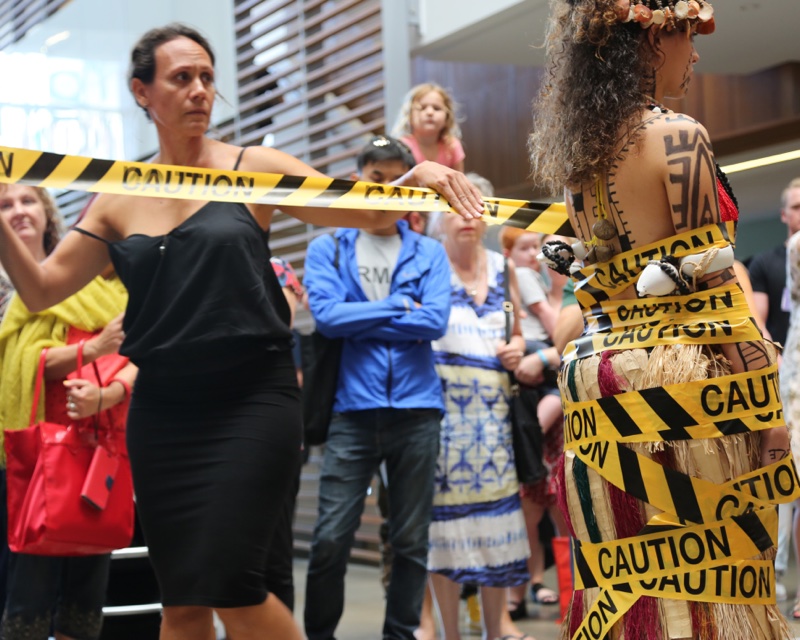 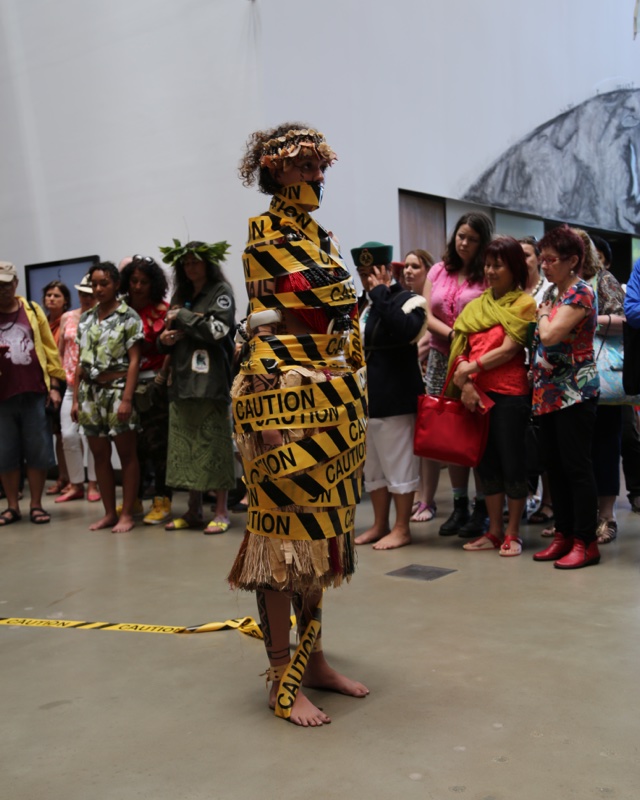 As a performative piece, A’inaisa relied on gesture, sound, and visual cues to create an affective situation that productively demarcated clear spaces of difference and embodied cultural tensions. The specific connotations of each element contributed to this experience: the yellow and black caution tape––used in the context of a highly controlled, large public institution––interacted with the bodies of a white, masculine-presenting “spectator,” Julia as mediator, and the tattooed, decorated body of Moale, to create a direct association with the struggle of institutional power, cultural translation, and states of embodiment that A’inaisa addresses.

The intervention––programed for the opening weekend of APT8 Live, a newly initiated series of performances and interventions held during the 8th Asian Pacific Triennial4–– was slated to be a celebratory piece involving a large group of performers, including Julia’s children, with elaborate costumes, music, and audience participation. Instead of exhibiting the beauty and dignity of Papua New Guinean culture, A’inaisa was a lament for the loss of that opportunity. While planning the original performance, Julia was told that her children could not participate, based on their status as minors and a (mis)understanding that their costumes would inappropriately expose their bodies.5 As Julia emphasized in a Skype interview between her and I in March of 2016, it was the paternalistic approach that was most unsettling. That her children were not “allowed” to perform reflects an ongoing imposition of Western, European approaches to modesty, and compulsive control over bodies and sexuality. Furthermore the implied suggestion that Julia would not be conscientious enough to ensure the safety of her own family violated the core of her values as a Papuan woman.

Having lived in Australia for much of her life, Julia and, by extension, the Sunameke crew are extremely aware of the need to navigate the two cultures, which so often involves extraneous adaptation of their Indigenous forms of expression. Given the constant pressure to adapt, and the consequences of being embodied in a (non-white) form that will always resist conformation, Julia decided to use the space she was given at APT8 Live to address the individual and cultural labour performed by Pacifica Indigenous peoples on a daily basis. A’inaisa in this context became a catalyst for expressing the burden of constantly negotiating negative assumptions, based on skin colour, tattoo practices, or dress, and the poor treatment that often results from these.

Several months after the performance, Moale published a blog post, “Stand Strong, Stand Proud - Gini Goada Gini Auka,” reflecting on the intervention and the challenges of being a young Papuan Australian woman navigating both identities in the context of Australian society. On the question of modesty she writes:

Yes, according to Western Colonial society, our backs and our chests are exposed. But within our Papuan culture, it wasn’t once considered “exposure;” to be tattooed is to be covered. What may seem immodest in our Australian culture is considered beautiful in Papua New Guinean culture––wearing a grass skirt, bilas, and proudly displaying our reva reva (tattoo/tatu). (Living Mixed, January 26, 2016) 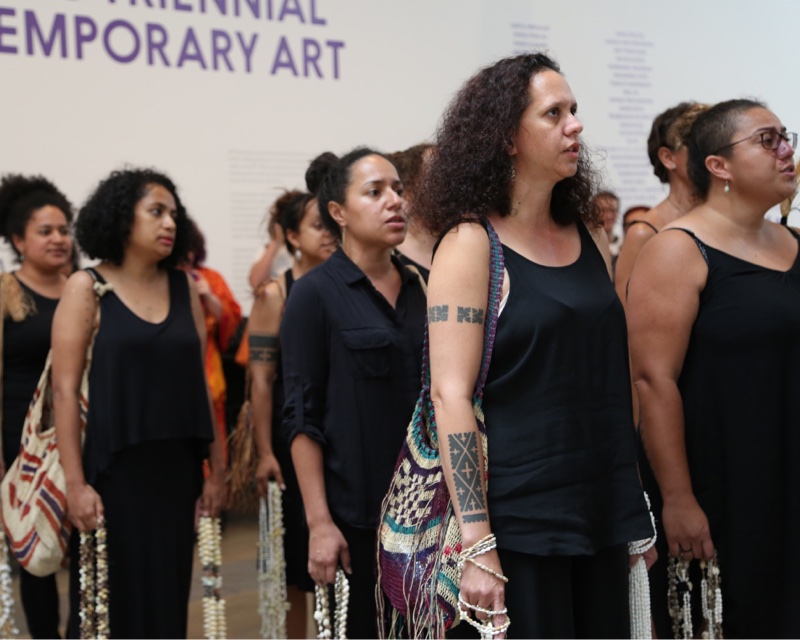 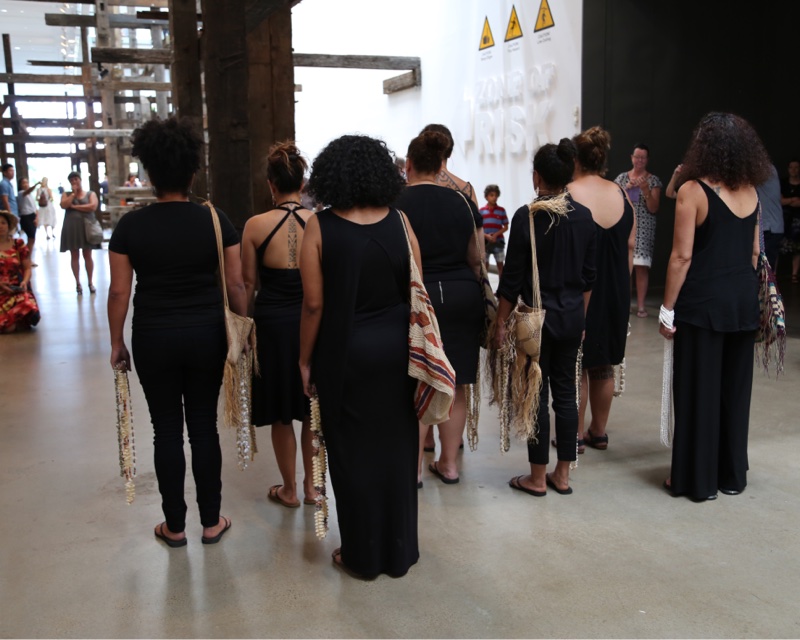 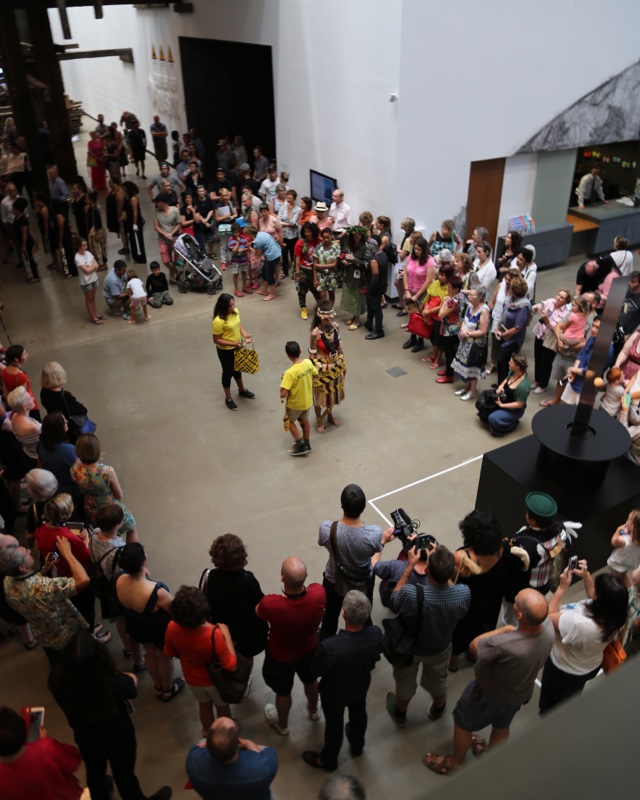 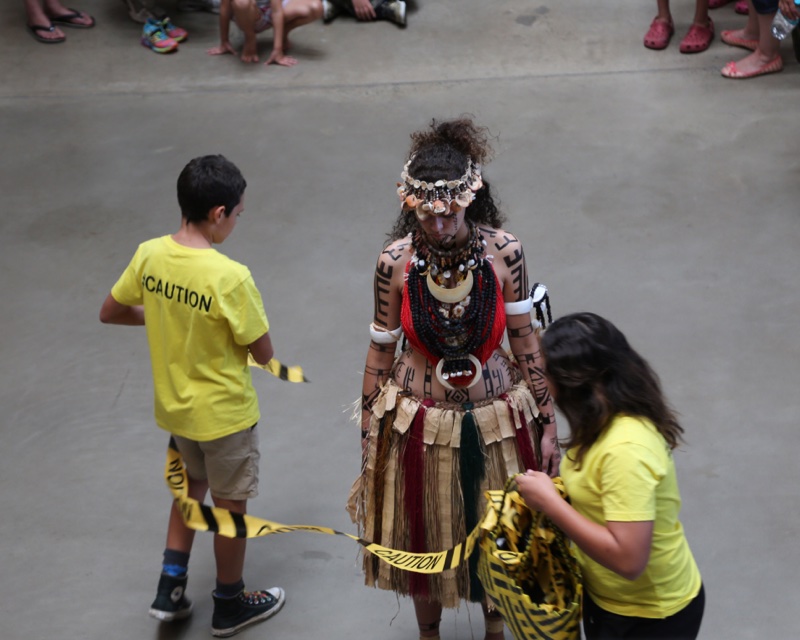 Before knowing anything about A’inaisa, I was compelled by the visual narrative captured by the photo documentation and by Numa’s textual provocation. I immediately wanted to learn more about the performance and the artist’s experience in a large arts institution like QAGOMA, particularly because I know it is not an isolated occurrence. The cultural censorship that Sunameke confronted in their performance resonated with stories I have heard about the experiences of Indigenous artists in Canada. The affective quality of the photo documentation of A’inaisa is not only an archivable reminder of the persistence of white supremacy, but also the persistence of Indigenous resistance, and the beauty of their unique and specific cultural expressions.

Examining the limits of inclusion, this performance and its documentation can be situated alongside current theoretical work on recognition. As addressed by Indigenous scholars including Glen Coulthard and Audra Simpson, this framework interrogates relevant questions such as: Who has the authority to recognize? Who decides what cultural expressions are allowed in and what shape that expression takes?6 Exposure to the work of Sunameke and A’inaisa through social media and my conversations with Julia reinforced the need for increased attentiveness to the challenges faced by Indigenous and other artists who do not fit Eurocentric, hetero-patriarchal expectations that continue to inform art institutions within settler colonial societies. Though some institutions are supportive, and Indigenous people are doing an admirable job at taking up space in them, many remain rife with problematic mandates, attitudes and curatorial approaches. In other instances there may be the appearance of openness––such as in the case of QAGOMA’s APT8––but it remains contained within the context of institutional authority, which reserves the right to approve or deny the terms of expression. In Julia’s words: “at some point you gotta let go of [our] hand and let us be who we are, stop gatekeeping.”7 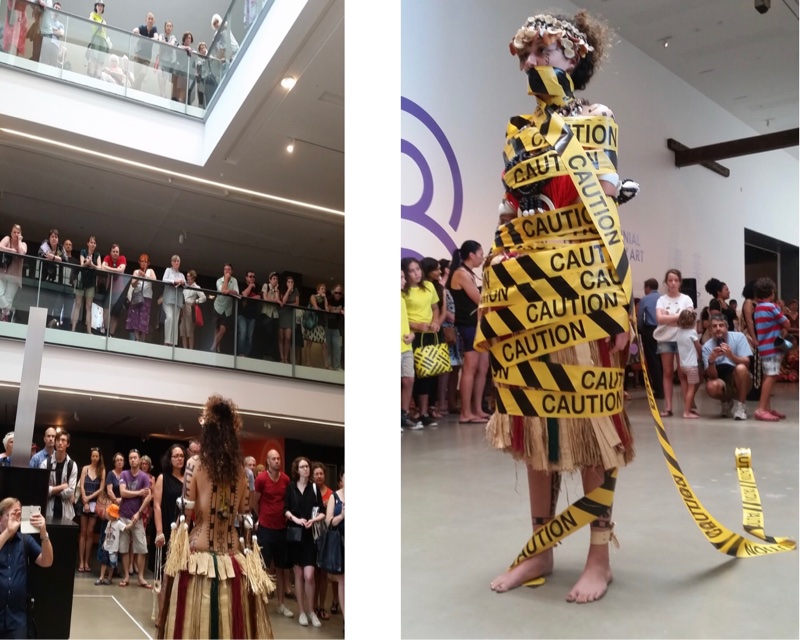 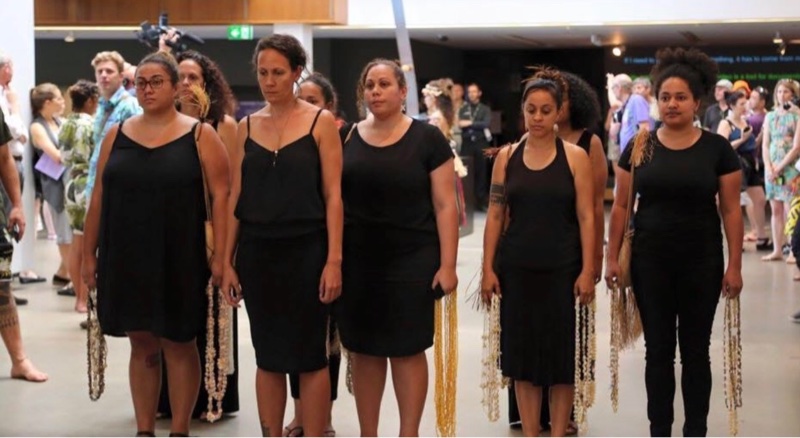 2 Sunameke is comprised of a tight-knit group of women: performers, vocalists, filmmakers, traditional tattoo artists. The mandate is, “to...actively connect [...] with and express [...] Papua New Guinean heritage in an environment where such cultural appreciation and representation was not [regularly] demonstrated.”, “about us,” Sunameke Productions, accessed April 1, 2016, http://www.sunameke.com/#!about/c1enr.

5 Julia has asked that I do not include specific people’s names in this discussion. She recognizes the problem within the institution as a systemic one, and her response, though triggered by the situation at the QAGOMA, is reflecting on larger issues at play in Australian dominant culture at large